Striker  Percy Tau scored an equalizer with the last kick of the game to earn Bafana Bafana a 1-1 draw with Paraguay in the Nelson Mandela Challenge on Tuesday evening.

Coach Stuart Baxter rung the changes for the friendly international after South Africa secured a vital point in their AFCON qualifier against Nigeria over the weekend.

Frederico Santander came within a hair of giving Paraguay an early lead in the 16th minute when he sprung the offside trap and beat Darren Keet in the South Africa net only to see the ball cannon off the post. 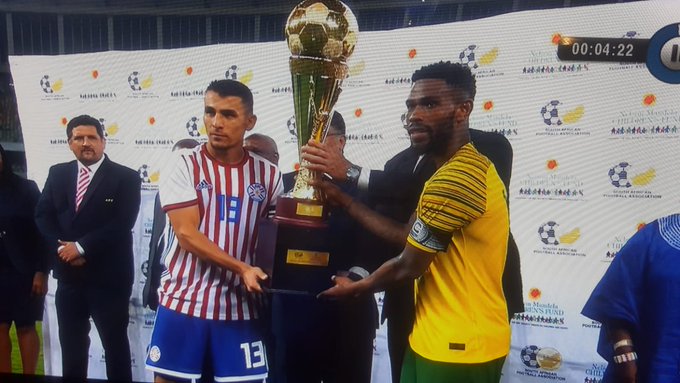 19 people are talking about this

Tau had a chance to put the hosts ahead just ten minutes later but his side-fotted effort lack the power required to beat Antony Silva in the Paraguay goal.

Cecilio Dominguez would eventually fashion the opening when  his low strike from the left was parried by Keet into the path of Santander who completed the tap-in to give Paraguay a 1-0 lead.

Dominguez came close to doubling the advantage six minutes before the break as he lashed a powerful shot after a jinking run but saw the ball slam into the near post and away.

The opening fifteen minutes of the second half of the game were frantic and offered both sides opportunities to score. Thulani Hlatshwayo’s powerful diving header in the 62nd minute would have restored parity had it not been narrowly wide of the goal. Silva pulled out a great save to deny Vincent Pule with 12 minutes left on the clock but ultimately the hosts found a way through.

Tau latched onto a great pass from Thulani Serero and slotted the ball past Silva with what turned out to be the final kick of the game.